I taught a six week tatting class at my church from March-April. Here are some pictures. 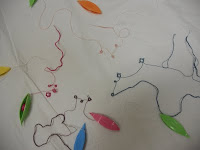 By the end of the first class, all four students could do the "flip". This is a picture of rings and chain.

Two of the students finished their first heart. This was their first actual pattern that they completed. I was so pround of them. 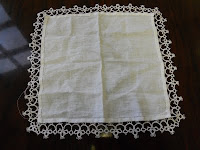 Here is the first hanky that one of them tatted. This is before blocking. She has also made several snowflakes. Another student is still working on an edging.
Unfortunately, I had two to decide they did not like tatting. I asked all of them to practice a little everyday so that they would not forget. These two did not have/or take the time to practice, so it was relearn the "flip" each week. Needless to say, once the class was over, they did not want anymore to do with tatting. One of them even gave her thread to another student in the class.
I always tell students that "once you get the hang of it, tatting can be so relaxing." So far, they say tatting is not relaxing, but it's enjoyable.
I do think that the ones that continue to tat are doing a good job.

Congratulations on teaching FOUR people how to tat!

I've never taught anyone how to tat. I did however, recently help a tatter learn how to add beads to her work and now I think she's becoming a beading addict. :)
~M

I think you did a great job with your students! Even the two who chose not to continue have learned something... an appreciation for what goes into lacemaking. That hanky is awesome!

Yay!!! Two more tatters and they're serious, especially the one who made a hanky! It's beautiful! Thank you for teaching them!

Well done on adding more tatters into Tatland. And they showed good work too. Credit to the teacher.

I had my share of success and failures too when teaching. One managed to learn at one sitting and started adding beads at the next session. Another dropped out after one lesson.

There are people at my church who want to learn to tat and one in particular keeps on at me to start lessons! I so admire what you have done, your time and effort has certainly been well worth it.

They did a good job but they have a very good instructor.
Elizabeth

maybe they have the same talent with their instructor .. or ability that has been ingrained in them since birth .. who knows?